A UNIQUE “TRUCK” HOUSE.  Everybody’s got special interests in the fire service.” If your’s happens to focus on interesting “Enjine’s,” you’ve got pretty fertile territory; there’s likely to be an engine in virtually every fire station you pass– there’s got to be an interesting one every once in a while?  But, those whose preferences stray a little farther afield– say, heavy rescues or squads, hazmat units, trucks, etc.– have to be more patient, occasionally finding one mixed in with one of those ubiquitous pumpers.  For me, though, the real finds are those scarce single piece fire stations that house only a single, special service.

In this regard, it’s hard to imagine a better example than Baltimore’s former Truck 15. We were introduced to the station by a then-member of the company, Firefighter Jerry Smith, Jr. Jerry is now assigned to Rescue 1 at the Stedman mega-station.  15’s old house was a long, single-bay, turn-of-the-century station, which was, most recently, occupied by a single Seagrave tractor-drawn aerial– Truck 15.  On arrival, you found a wide street, populated by fairly spartan row-houses, a Baltimore staple.

Inside the single door of the two-story station was an equally spare daytime environment.  The truck was out when we first arrived.  The front 2/3rds of the station which would normally be occupied by the truck was flanked by an array of old and older call-taking equipment (on the driver’s side of the truck) and rows of red-doored lockers, some of them with paneled wood doors, others the more modern louvered steel locker-room type. Hanging on the outside of many of the locker’s were the user’s personal day-to-day hand tool(s). 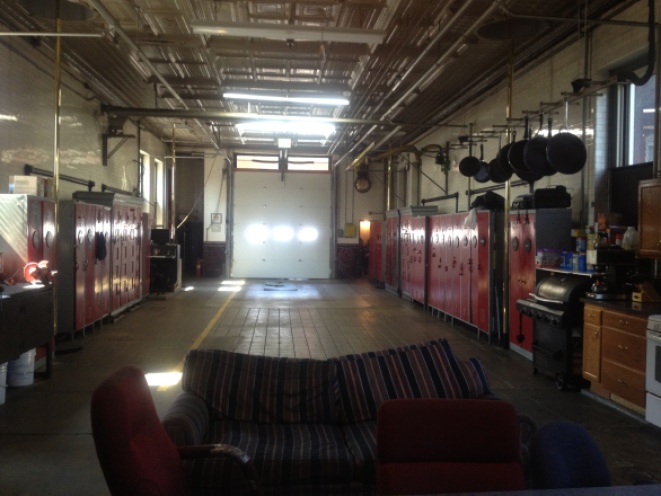 TOOL PARADE. This should be a tradition– a requirement– for every special ops station. Put your tools out on the table, like wild west gunslingers in a poker game. It gives visitors an immediate lay of the land, and for occupants, an open invitation for continued tall tales, discussion, debate, and ridicule. In old 15’s, for example, there were, among other tools, a Boston Rake, a cane and a so-called “Ringer” Hook from Fire Hooks Unlimited, a combination of a Halligan Hook on one end and a Boston Rake on the other. Looking back on the histories of some of the tools hanging there was probably enough to rekindle memories of many an incident or opinion of the past.

The front of the station was also totally cool in its display/utilization of FD relics. The watch desk is right out there on the floor, a gray metal thing typical of the promise of early modern communications in the 1950s. It had character in its own right but shared the spotlight with older artifacts from the turn of the century: a tally board for keeping a running account of who was out on which boxes, and an alarm gong about the size of cattle trough.
Behind the truck, at the back of the bay, was an informal, open-plan “day room” composed of a mixed bag of lived in, “all-star” furniture.  And, along another outside wall, at the base of a spiral stair to the second floor (to keep the horses out of the bunk room) was a one-wall kitchen with a suspended Pompier ladder forming a very classy rack for pots and pans. VERY classy.

TOOL TIPS– A BREACHING PICKHEAD AXE FOR ROOF WORK.  You can tell a lot about the culture of a special ops company by looking at their tools and apparatus.  After 15’s truck was back in quarters, Jerry brought out a few tools that the company had tweaked-up. First, the tip of the 100′ stick was equipped with a very well-placed, self-leveling 500 Watt flood light, guaranteed to light up not only the contact area of the tip but also the entire roof area beyond.  The crew had also machined out a rounded somewhat sharpened cut in the adze of their Halligan for lock-pulling chores– the obvious advantage of their approach was that it left a very robust leading edge on the adz, rather than the pointed “Devil’s ears” of an “A-tool” machined out of the same area– ears that you commonly see that get peened over so quickly and aren’t aligned for lock pulling when you need them. Tools needed by the operator for roof ventilation chores were appropriately mounted at the tip of the aerial fly section.

To me, the simplest, but neatest, tweak was the slightly rounded “breaking” edge (rather than a sharp cutting edge) that Truck 15 had formed on the blade of their ventilation pickhead. Although this visit substantially pre-dated the Iron Fox’s popularization of this kind of striking edge, they were clearly following the same play book.

TOOL TIPS– THE HAND MAUL. As we walked by the lockers, Jerry (at the far right in the photo below) mentioned that, on those occasions when he was riding as acting officer, he carried a 3-pound rock hammer (small, short, hand maul or sledge) in his pocket.  Later, as we were about to leave, we had to ask: “Why would anyone carry that small sledge hammer in their pocket?”  The explanation actually made lots of sense; in Baltimore, truck officers customary perform forcible entry, by themselves.  Rather than awkwardly trying to strike and drive the Halligan bar with an axe, Jerry (and others?) did so with the rock hammer.

Nice idea.  We tried it out back home.  A car fire and a separate motor vehicle collision were all it took to confirm that the hand maul and Halligan are a great combination. Driving the Halligan, alone, with the hand maul is a pretty precise operation (which is more than most teams can say for the flat-head and Halligan combination). Over time, this idea has generated a lot of discussion and experimentation.  So much so that separate running blog post is devoted to the topic.  See “Smith-It” under the “Tools” category– we’ve dedicated the concept to Jerry.

TEAMWORK– RIDING ASSIGNMENTS. While some companies divide up chores at roll-call or prefer to do it en route to a call, Many others have chosen to develop more regularly used job descriptions for riding positions. The latter system was in effect at Truck 15, as summarized below. The most common building type in Truck 15’s first due was 2-story row houses, of “ordinary” construction (masonry walls w/ wood, floor and ceiling structure), so the assignments shown below are tailored for them– they might have been markedly different for other categories of emergencies:

The crew had made several tool-related decisions in the interests of maximizing their efficiency, including the following:

The “Step” and “Tiller” Positions (V.E.S.): At the scene (on the “A” side for the first due truck), the “Step” dismounts the truck and– if the building isn’t more than a few steps away– quickly tosses a Halligan bar toward the front porch (for the Officer) and their own 5′ Halligan Hook to a spot below or near the area they expect to be laddering. By then, the “Tiller” has dismounted and the two of them work on laddering for V.E.S., starting with the heaviest ladder (while they’re together and freshest) and working down from there. The “Step” generally takes the uppermost window, so on a two-story row house, they’re likely to be using their 5′ Halligan Hook working off of a 24″ extension ladder. In this scenario, the “Tiller” is likely to be using the roof ladder with their Boston Rake already attached, ready for use. Off they go.

The “Officer” Position (Initial Entry & Support of the Interior Team): The “Officer” gets off with a 4′ Halligan Hook, and does a quick size-up of the fire location and probable engine crew interior needs. After using the Halligan Bar, if needed, the Officer takes the Halligan Hook and starts searching and reconnoitering along the most direct route to the principal fire area, supporting the engine crew as necessary. Some officers preferred performing their search with the pickhead axe that was mounted on the right running board of the tractor.

The “Driver” Position (Roof Ventilation): The “Driver” positions the truck’s turntable for optimal access to the roof, then raises and positions the aerial for maximum roof ventilation convenience. A pickhead axe and a pike pole are already mounted at the tip so the “Driver” only has the saw to carry to the roof.  If there are skylights, vents and other roof features that can be opened relatively quickly, they will do so with the hand tools, before using the saw, as needed, for larger-surface-area ventilation.

TRAINING TIPS– ON-SITE ENTRY PROPS. Besides an organized plan of action, the presence of training props is a good sign of an active, engaged company– especially those with signs of use. Truck 15’s back yard had a nice multi-purpose forcible entry prop, and stacks of replacement materials for practicing and refining the kinds of entry hurdles they are likely to encounter.

POSTSCRIPT.  I visited Truck 15 in February of 2012.  At the time, it was the busiest truck in Baltimore.  Nevertheless, as a budget-saving measure, the city closed it and demobilized Truck 15, soon after my visit.  The most popular explanation for closing that house was that, since it was surrounded by so many other trucks, it had the territory that could be most easily divided up among other companies.  But the house wasn’t empty long.  It was reopened in July of 2012 by Engine 33 (formerly housed with Truck 5).